On Location at Camp Iroquois

For the last two summers I have been taking a group of adult and teen artists to YMCA Camp Iroquois to paint on location. We get there around 5:30 pm...after all the kids have gone home. We usually set up along the waterfront and try to capture the ever changing color of the lake and surrounding vegetation as the sun gets lower in the sky. A few people opt to paint one of the cabins or the trails leading into the woods. Our set-up is primitive, at least by studio standards. We get by with just the barest minimum of supplies, and as we load our palettes and gather our brushes, inevitably someone starts telling "best and worst camping trip" stories. Usually everyone has a story to share and the conversation is lively. After my demo, (short for demonstration, not demolition...although there was that one time...) each person wanders off to the area they have selected and begins to work. Conversation continues for a while, but as our artists get more involved with their subject matter, it grows quieter. I love to watch the complete absorption each artist has with their subject. Some find easy success, others will need to experiment with several color combinations and blending techniques before they are pleased with their efforts. By the end of the evening each artist has something to show; some are finished pieces, others are not. But there is always tomorrow night! This year I have made a change. Instead of working in acrylic paint, we will be using pastels. I love the vibrant, immediate color we achieve with pastels and the clean-up will be so much easier. No messy palettes to clean (OK exaggeration here... we always used paper palettes) but you get the idea. We are not just trying something new, we are streamlining our process. If you are interested, come and join us on July 24, 25 and 26 for 3 evenings of pastel painting on location from 5:30 pm - 7:30 pm. You need to register by July 15 at the East Area Family YMCA. $50 for YMCA members; $60 for Non-members. All art supplies are included. We will meet in the parking lot at Camp Iroquois, 4795 Sweet Road, Manlius. And yes, there is a shelter in case of inclement weather. 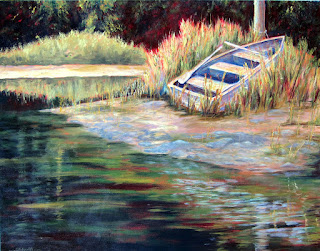 Posted by Joan Applebaum at 2:42 PM No comments:

Pansies and the Wolf Spider 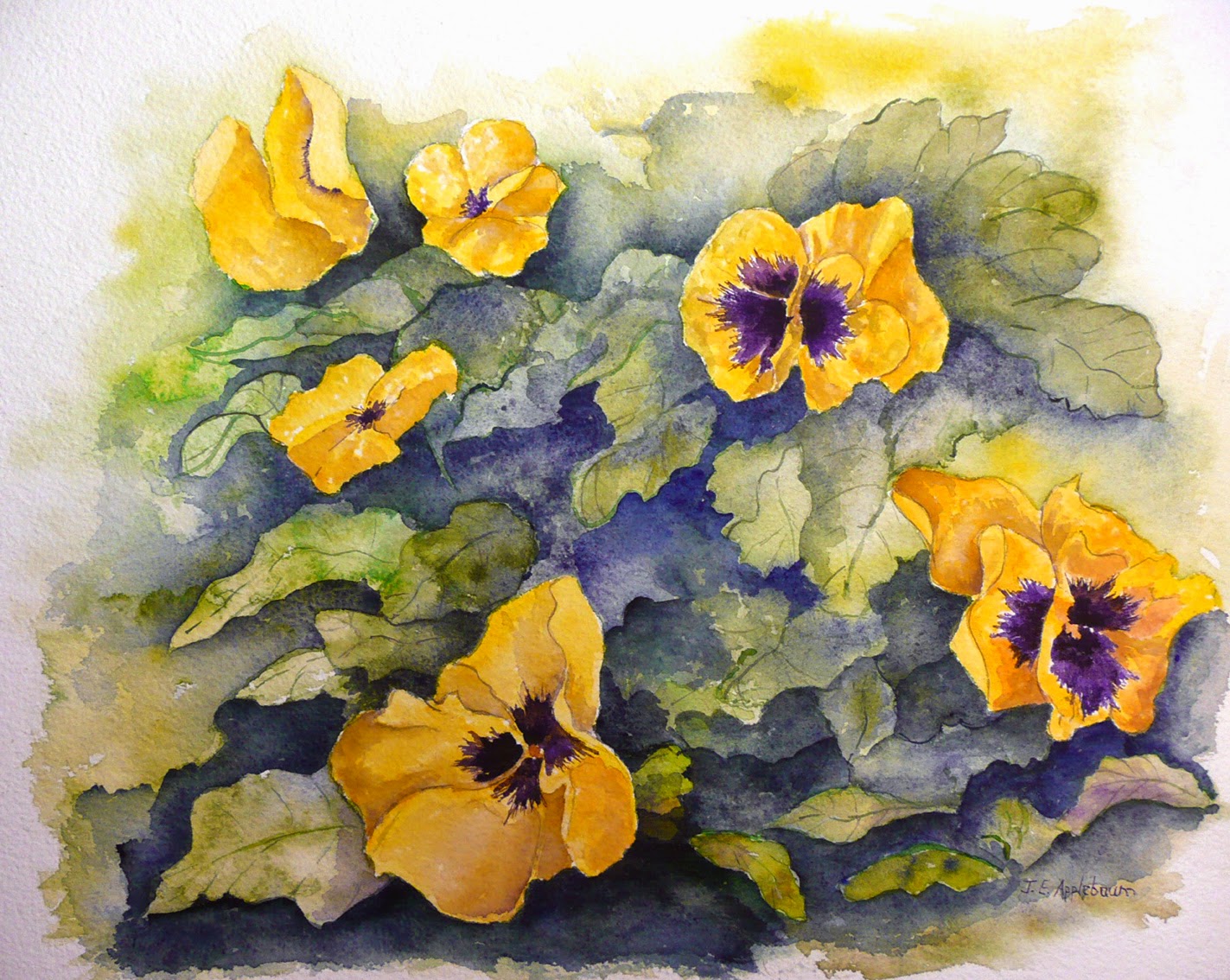 Well it has been over a month since I last blogged. I would like to say that it was because I was re-charging my creative self, but it was just plain busyness that kept me away from writing anything more than a quick post on Facebook.

I painted Pansies! because I was looking for a composition that had contrast, specifically areas of darkness contrasting with bright color. I was teaching a watercolor class where the students already had experience with the medium, but many were unsure of how to portray dark areas without resorting to black.

I also wanted to use the random quality of watercolor bloom, to help define the leaves. After lightly sketching the flowers and a few leaves, I wet just the areas where I wanted color to flow. All of the leaves and dark areas were washed with various shades of greens and blues. When the paper had dried slightly, but the paint was still wet, I dropped bits of clean water on random areas to let the watercolor bloom create the effects of dappled light on the leaves. After the leaves had dried somewhat, I added a bit of Payne's Gray to the darker, cooler, green/blue colors that I had mixed before. I used that color to add the shadowed areas around the leaves and punch up the contrast.

The pansies were painted with combinations of cadmium yellow and lemon yellow. I used a dark purple for the markings in the center of the pansies and used a very very dilute (mostly water, very little paint) to add shadows and depth to the flowers.

So are you wondering why I titled this blog Pansies and the Wolf Spider? Don't bother looking for the spider in the painting...this isn't a hidden pictures game.

Here's the story: I bought the flowers which were in one of the "hang it on your house kind of bags" on Mother's Day weekend and hung them on the tree which overhangs our deck at camp. When I returned to camp two weeks later, I discovered a bunch of shriveled.....but not dead pansies. I gave them some water and promised to bring them home where I could give them more TLC.

So when it was time to back up the car to go home I put the plant in a box along with some other items which needed to go back to civilization. I loaded my car, being careful to leave a space for the box full of ailing pansies (which would of course receive the best of care at home). As I was placing the box in my car I saw a huge wolf spider, big as my fist sitting in the box looking at me. Now, put yourself in my place...small car, one and a half hour ride home. I did the only thing I could possibly do....and I'm sure the pansies are just fine, sitting in the box, in the yard up at camp.
Posted by Joan Applebaum at 6:23 AM No comments: 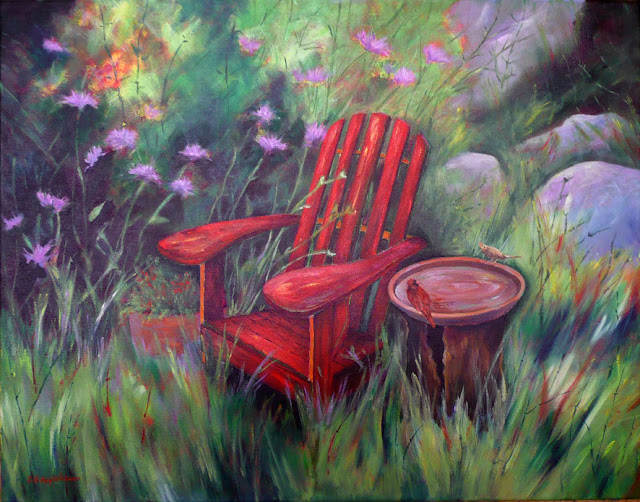